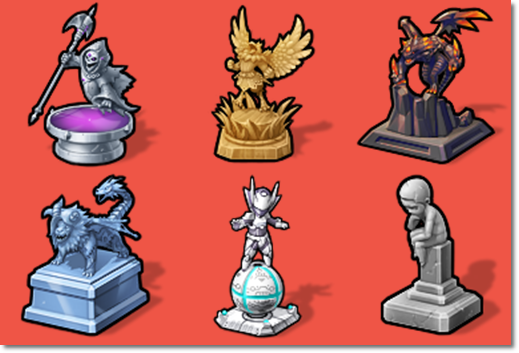 [How to Craft Mythic Grade Sculptures]

· Reach Transcendent +5 on any sculpture to upgrade them into Mythic grade.

· Maximize the Quality of Transcendent +5 sculptures by using large amounts of Loot and Moonbow Essences.

· Use the newly added Red Lunarium (x100) to upgrade the sculpture to Mythic grade.

ⓘ Newly added Red Lunarium can be crafted in the [Other] menu of the Crafting Station.

· +11~+15 Polishing is available for Mythic Sculptures.

· Reaching +11 Polishing on Mythic Sculptures adds a [Mythic Effect] to them.

Increasing Polishing level will increase the potency of the added [Mythic Effect].

ⓘ The newly added Diamond and Raw Diamond can be traded at the Exchange.

ⓘ Polishing up to +10 for Mythic Sculptures requires the same materials as before.

ⓘ Diamonds can be crafted in the [Material] menu of the Crafting Station.

Some changes and improvements were made with the official opening.

· They first appear at the below times and respawn every 30 minutes after they are defeated.

· The newly added Field Bosses will drop Spirit Essences and Raw Diamonds, which are used to make Diamonds for crafting Mythic grade sculptures.

· The duration of the XP +200% buff for server with the highest Bestia kill contribution was changed to [2 hours ▶ 8 hours].

· [Raw Diamond] was added to the individual rank and participation rewards for defeating Bestia.

· [Guild Rank] was added to the Battlefield of Valhalla Raid Rank Info.

· Guild rank is calculated by contribution between Guilds of the server that defeats Bestia first.

that defeats Bestia first depending on their contribution rank.

· The Guild and player with the highest contribution will be displayed to all players.

· Geographical changes will be made to Bestia's Lair.

· Objects that give buffs via interactions will be added to Bestia's Lair.

· XP decrease penalty upon death no longer applies in the Battlefield of Valhalla.

· You will no longer be able to exit Battlefield of Valhalla by pressing Return during combat.

- Difficulty 9 for Lv. 300 added and increased rewards for Daily Dungeons.

ⓘ Red items are either added or changed rewards.

- 2 new female hairstyles can be accessed with the Appearance Change Ticket. 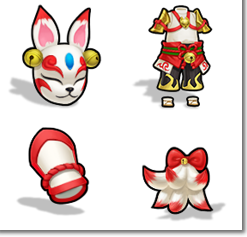 ⓘ Above items are available to exchange via the Happy Spring Collection Event.

6. Changes and additions were made to Mythic grade Hades equipment.

- DMG decrease no longer occurs with PvE monsters due to the removal of this effect.

- System message exposure improved based on the situation when character deletion is processed.

- SeoYoon/Yuren's Growth Plan missions will now be displayed at the quest bar, making it easier for players to set targets.

2. Players outside Basra Den can now know when a Traveling Merchant appears.

- A system message now notifies all players the floor on which the Traveling Merchant spawns in Basra Den.

- The 90% Traveling Merchant spawn condition system message will only be shown to those within Basra Den as before.

ⓘ World server areas, such as World Marias's Cave and Battlefield of Valhalla, will not have the system message displayed.

ⓘ System message will not be displayed to characters that cannot enter Basra Den.

- Added "Don't receive Notifications today" to the bottom right of the Battlefield of Valhalla Exchange Center and Collection Event UI.

when you toggle on the option, even if you have items to exchange.

1. Monster kills at any region will now count towards Guild Missions.

1. All Option Stones now have 0 weight.

- You can now purchase [Crafting Method - Job Master's Essence] without requiring Revered Likability with the Skill Instructor at Livias.

4. Changed the spawn location of the Twisted Abandoned Outpost boss.

6. Removed the camera zoom in and slow motion effect from when a Raid Boss is defeated.

1. Fixed the issue where the Region Scramble Siege Guild mark overlapped the map.

2. Fixed the issue where checks were undone in the Remote Shop when items are added to your inventory from Fishing or obtaining items.

3. Fixed the issue where the purchase button was displayed for discontinued Daily Benefit products on the PC version.

4. Fixed the issue where in-app purchases failed for Android devices under certain conditions.

5. Fixed the issue where entering expired or incorrect coupon codes caused the game to crash on Android devices.

9. Fixed the issue where the HP bar moved when you moved your character immediately after being hit.

10. Fixed the issue where the reward upon purchase banner text is different after purchasing the Login Time Event.

11. Fixed the issue where you could not interact with 1st Job NPCs after changing to a Common 2nd Job.